What's the meaning of the phrase 'Stand and deliver'?

A demand for money, often associated with English highwaymen.

What's the origin of the phrase 'Stand and deliver'?

Highwaymen are up there with pirates as the anti-heroes of literature and B-feature films. Their flamboyant and audacious image provides ready-made stock characters. The image is far from the reality; pirates didn't bellow 'shiver me timbers' or desport themselves with the obligatory eye-patches, peg-legs or Johnny Depp style braids and earrings. Likewise, as we shall see, highwaymen were often little more than what we would now call muggers, although some highwaymen did fit into the 'gentleman of the road' persona that dramatists later portrayed. Nor was 'stand and deliver' an invention of screenwriters, but a very real threat heard by 18th century travellers.

Highway robbery was defined by the English legal system as any robbery which took place on the King's Highway. It was viewed as a particularly serious crime because it interfered with the freedom of movement, which was considered a fundamental right.

So, why 'stand and deliver'? The word 'stand' has been used to mean 'come to a halt' since the 16th century. Shakespeare used it in Two Gentlemen of Verona, 1591:

"Stand sir, and throw us that you have about'ye."

The expression 'stand and deliver' must have been established in the language by 1714, as Alexander Smith included it in his reference work The History of the Lives of the Most Noted Highwaymen:

"He order'd him to Stand and Deliver."

The Old Bailey was and is England's primary criminal court and, fortunately for the etymological community, it houses an invaluable documentary resource, the largest body of text detailing the lives of the common people of England, namely The Proceedings of the Old Bailey, 1674-1913. That record lists an early use of the term 'stand and deliver' in the case of Robert Jackson, tried for Highway Robbery on 7th September 1720. Jackson was indicted for "Assaulting John Andrews on the High Way, putting him in Fear, and taking from him a Silver Watch value £4 10s". A witness testified: 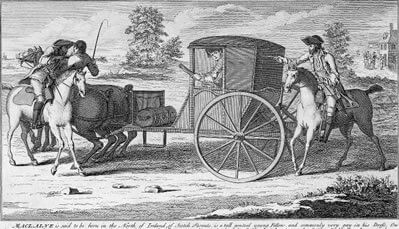 That's an example of the common pedestrian highwayman. For an example of the mounted 'gentleman of the road' we need to look to "Captain" James MacLaine. MacLaine was a notorious and prolific highwayman who specialised in robbing from the rich and famous. The accompanying picture, helpfully titled 'An Exact Representation of Maclaine the Highwayman Robbing Lord Eglington on Hounslow Heath on the 26th June. 1750' shows MacLaine in action. He developed a taste for finery (most of it stolen from his victims) and text below the picture states that MacLaine was 'A tall young fellow and commonly very gay in his dress'. He became something of a celebrity and was the model for Macheath, the antihero of John Gay's The Beggar's Opera and of Mack the Knife in Brecht's Threepenny Opera. 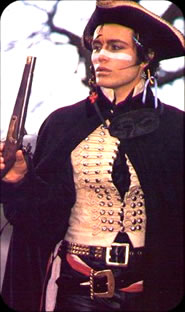 MacLaine was also the source of the 'Dandy Highwayman' imagery used by Adam Ant in his 1981 song Stand and Deliver.

Just in case people didn't get the idea, from the 1750s onward the 'stand and deliver' command was extended to include 'your money or your life'. An early example, also from the proceedings of the Old Bailey, is found in the trial of James Abbot for highway robbery on 27th February 1754. Abbot's victim gave this testimony:

When we came into Hyde Park the prisoner, Abbot, came up to me, and put a pistol to my breast, and said, D - n you, deliver to me this moment, and make no noise, for if you do I will shoot you dead. I will have your money or your life before you wag [move] a step farther.

Like most of his compatriots, Abbot came to a sticky end. The Old Bailey records show that Robert Jackson, James Abbot and James MacLaine were all hanged for their crimes.

Highway robbery cases are no longer brought to trial in the UK - armed robberies are tried as such regardless of where they are committed. The mounted robber disappeared from English roads in the late 1820s and the last prosecution for highway robbery was heard at the Old Bailey in 1897.

These days the highwayman's best-known lines are more likely to be found in comedy skits than on the highway. Jack Benny got good mileage out of the 'your money or your life' when he used it as a gag that played on his tight-fisted stage persona. The gag's set-up was that a mugger approached Benny and demanded, "Your money or your life". After a long pause, the mugger repeated the demand and Benny replied, "I'm thinking it over". Spike Milligan also used the phrase to comic effect; his punch line was a typically surreal "Take my life; I'm saving for my birthday".